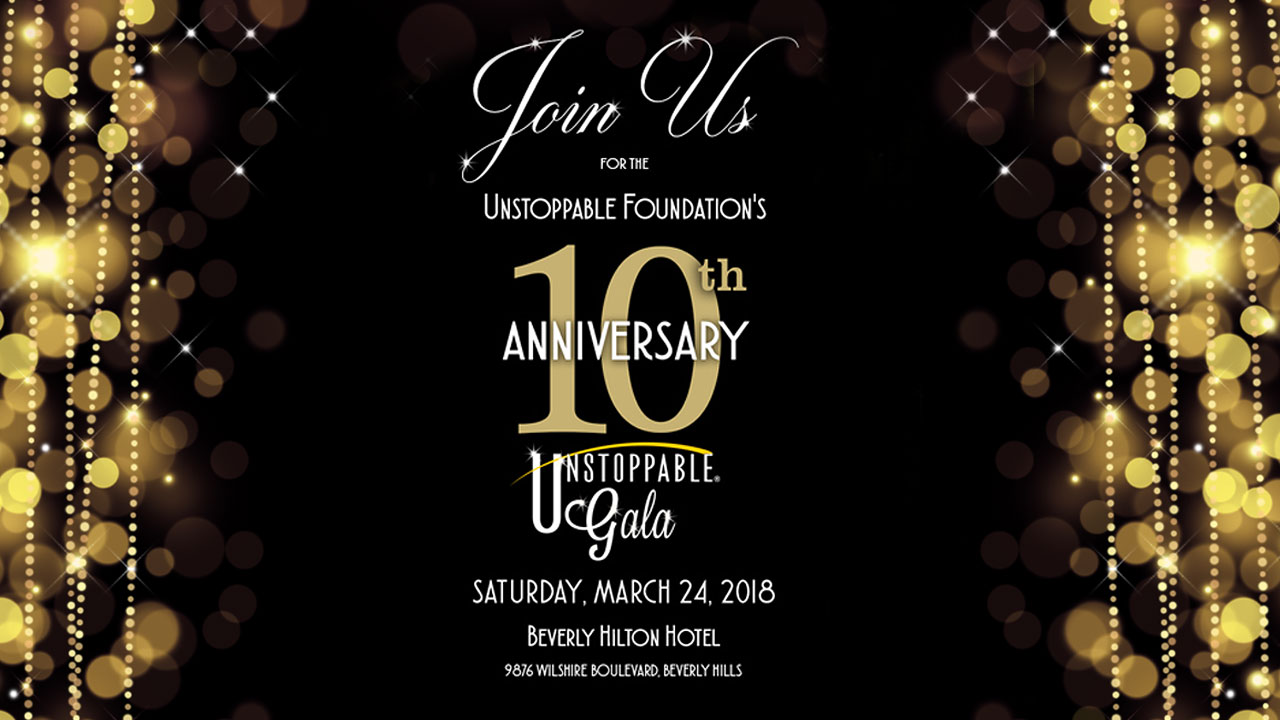 LOS ANGELES (March 27, 2018) – On Saturday, March 24 Hollywood stars, an NFL Hall-of-Famer and leaders of the transformational community came out to support the 10th Anniversary Unstoppable Foundation gala in the International Ballroom at the Beverly Hilton Hotel in Beverly Hills, where over $1.4 Million was raised for the organization.

The Unstoppable Foundation, launched by Cynthia Kersey, provides education, clean water, health care, nutritious food and training for parents to create a sustainable, improved lifestyle for families around the world. The charity has educated 35,000 kids in the past decade in countries including Uganda, Liberia and Kenya.

Two women responsible for empowering others were honored during the evening. The 2018 Unstoppable Achievement Award went to Jane “Mama Jane” Marindany from Emori Joi, Kenya, which is the first community that the Foundation supported in Kenya and is now sustainable. Together they built the village’s first school helping to educate local children. “Mama Jane” has also learned how to run her own business.
Sandy Gallagher, CEO of the Proctor Gallagher Institute, was also honored. Her company matched donations up to $500,000 to the Unstoppable Foundation.

Rousing entertainment during the gala was provided by Janice Freeman who delivered a powerful rendition of “This is Me” from The Greatest Showman, the Jeff Lams Band, the Cantinas Arts Dancers and the Kenyan Boys Choir, who performed three times.

About the Unstoppable Foundation:
The Unstoppable Foundation is a nonprofit humanitarian organization that empowers lives through education and moves communities in developing countries from surviving to thriving so that every person can realize their full potential. The Foundation’s approach to creating sustainable education is a proven, holistic 5-Pillar development model called Sponsor A Village (SAV). SAV incorporates everything crucial to lifting communities out of poverty and removing obstacles to educating children by providing access to primary education, clean water and sanitation, healthcare, food and nutrition, and income training for parents.

To ensure students are able to gain employment in their community and increase the standard of living for themselves and their families, the Unstoppable Foundation awards full scholarships to qualifying high school graduates in the Maasai Mara region of Kenya through their Unstoppable Scholars program. Unstoppable Scholars receive a state-of- the-art education that combines theoretical studies with technical training, placements and internships. Students also receive leadership and empowerment training – enabling them to achieve their full potential as leaders in their families, communities and the world at large.