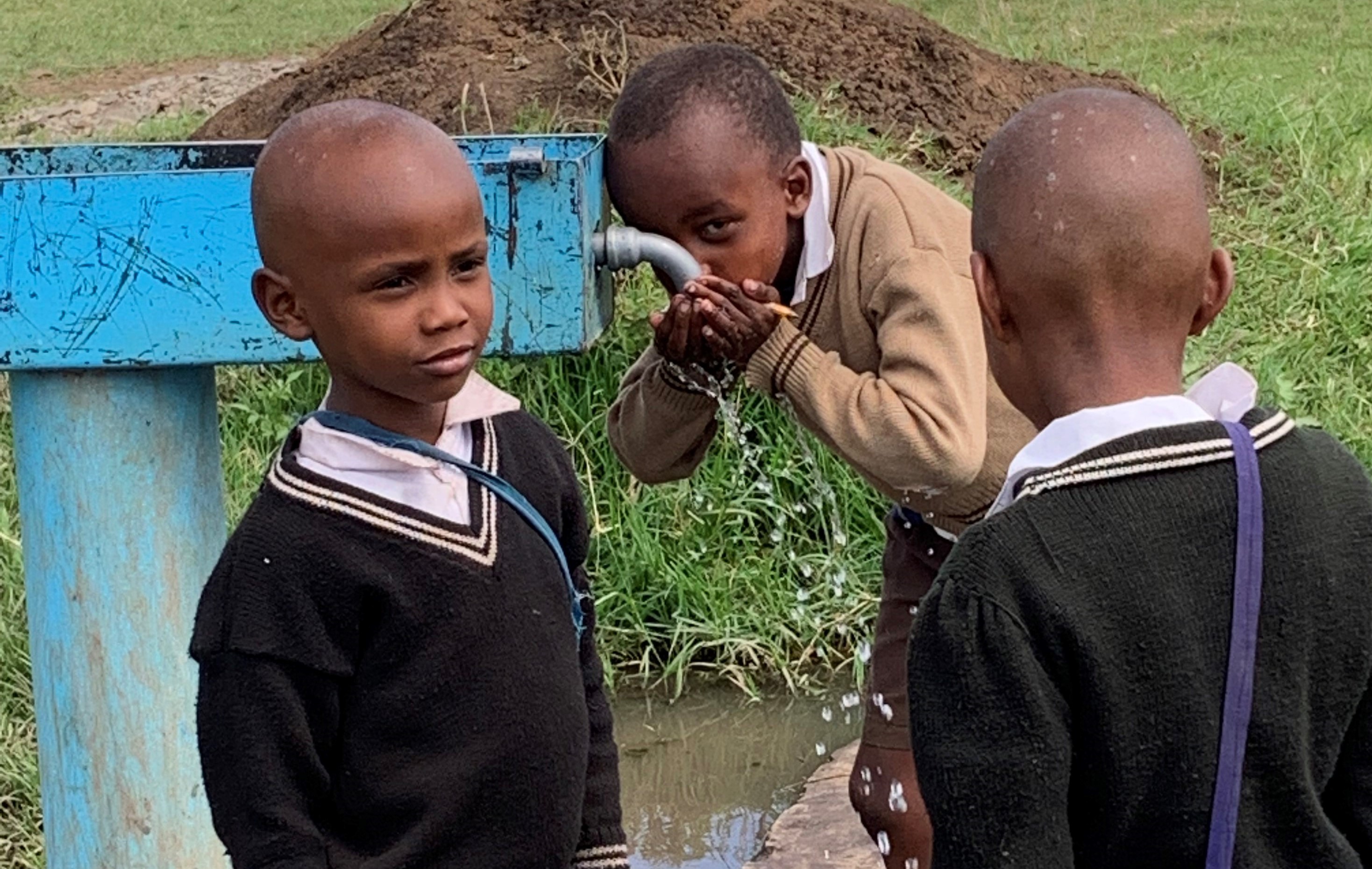 In March, I was fortunate to be able to travel to Kenya to get a first-hand look at the work the Unstoppable Foundation does to support and empower rural communities lacking in basic health, sanitation and education infrastructure. It is no understatement to say the experience was profound and life-altering. In my first few weeks on the job at the Unstoppable Foundation, a phrase I heard repeatedly was: “you’ll see when you get there” — and it was right on the money. There really was no substitute for witnessing the incredible difference we are making with my own eyes. Not everyone is able to make the long journey, though, so I’ve done my very best in words to bring you, our friends and supporters, along with me below.

I tried to focus on the horizon, but the green hills bounced around my field of vision as the Land Rover climbed the boulder-strewn clay road. For the fourth or fifth time that morning, I reached up and rubbed the beige patch behind my ear, willing it to release more medication into my bloodstream to counteract the carsickness. As we lurched sideways and mounted the verge at an angle, my hand reflexively gripped the door handle. While I was grateful that the heavy rains of the previous night had tamped down the dust, reducing my seemingly insatiable thirst on these hot rides, it had also washed the road away in some areas. Our only route through lay up the grassy embankment. The condition of the road wasn’t our only obstacle, though – there was still the matter of the cows, impervious to our presence as they ambled alongside us. Inching our way forward through the herd, the clanking of cowbells rose over the laboring engine and crunching gravel, and I reflected again on how I hadn’t fully appreciated the multi-faceted meanings of the word “remote” from behind my computer screen in California.

In the hour and a half since we had set off from camp, I had seen far more cows and goats than people. We passed the occasional Kipsigis hut, with its conical thatched roof rising to a point atop mud walls, or a flat-roofed Maasai home. Occasionally, a cluster of up to a dozen dwellings would be visible in the distance. Despite the sparsely-populated appearance of the landscape, we passed clutches of children trotting along the side of the road. In the matching dresses and frayed knits of their uniforms, they hurried to distant schools. Although there were certainly no traffic hazards to speak of, I was astounded by the youth of some of the groups. Children young as 3 and 4 made the trek, their minders no more than 5 or 6 years old. “Jambo!!” they squealed at us as we drove past, erupting in smiles and waving wildly at us. Unable to suppress grin, I waved back in return. Anywhere in the world, children are children.

Our driver threw our vehicle into park in the middle of a grassy, rock-strewn field and announced that we were at Nderiat Primary School – the site of the Unstoppable Foundation’s next project as part of our Sponsor A Village (SAV) program. School wasn’t in session, but by the time I stepped onto the grass, the first children had already appeared. At the end of the road, behind the school gate, the throng silently observed their visitors with round eyes and curious expressions. I looked at the kids and remembered what I’d read about their lives in Nderiat, where only 40% of the community’s children are enrolled in school, and even fewer are able to attend. The extreme poverty of the community, where most live on less than a dollar a day, forces children, as soon as they are able to walk, to work to help support their families. Illness is rampant due to the consumption of contaminated river water, which is the community’s main water source. 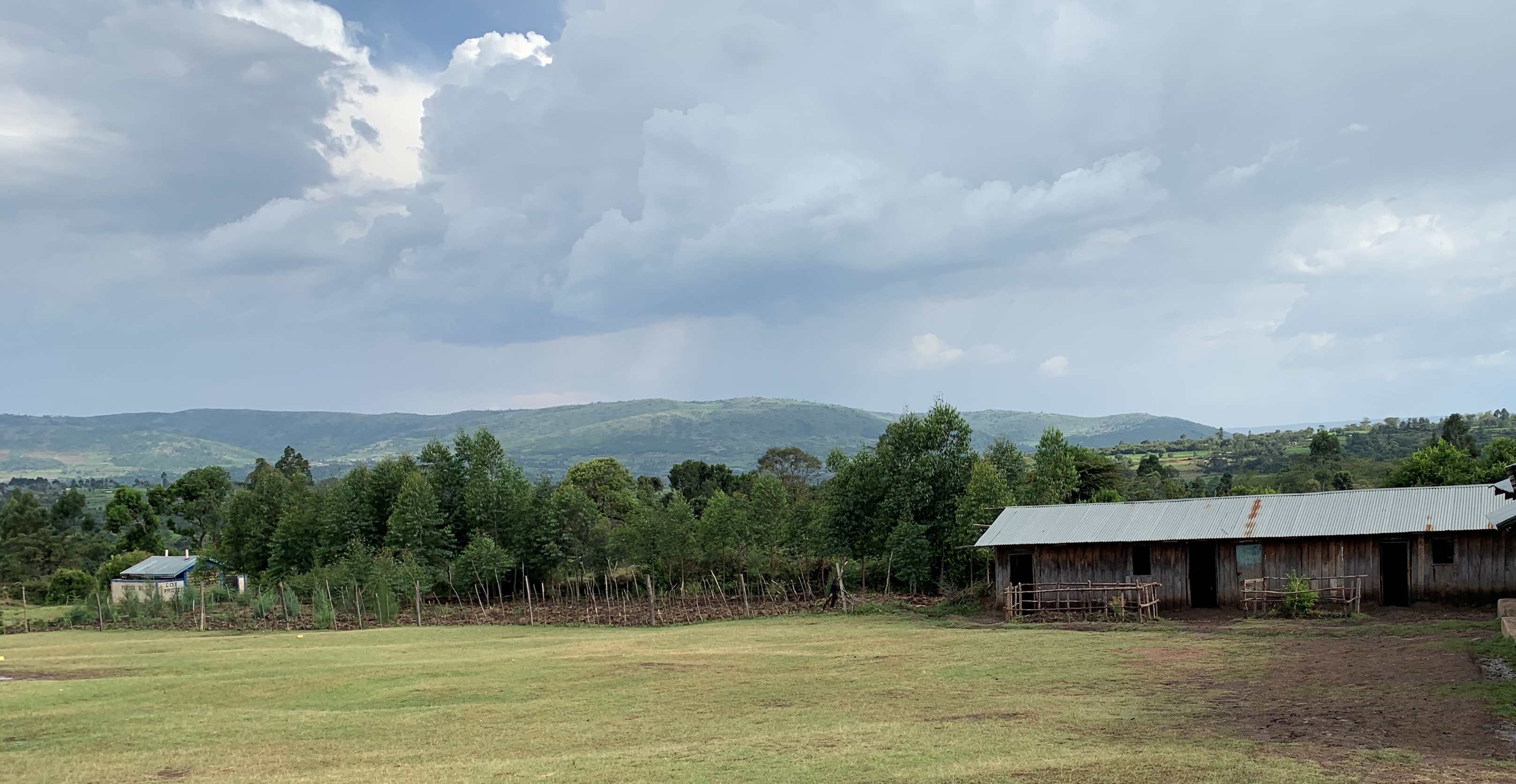 The facilities at the school made my heart sink. The two classroom buildings were in terrible disrepair, and woefully inadequate to accommodate even half as many of the more than 300 students enrolled in the school. I walked up to a splintering timber classroom block, armed with camera to document our “before” photos and paused while I figured out how to cross the ankle-deep channel of mud that ran in front of the building. I regarded the classroom opposite me. It had no door and gaps in the timber walls were big enough to poke my fingers through. Whatever the conditions outside – freezing or sweltering – the weather would be the same in the classroom. There were no lights, or electricity, and through the gloom I could see that the bedroom-sized classroom had been partitioned off from the neighboring classroom with plywood. The barrier ended several feet below the ceiling, though, and I imagined the teacher on the other side, laboring to be heard over his neighbors. 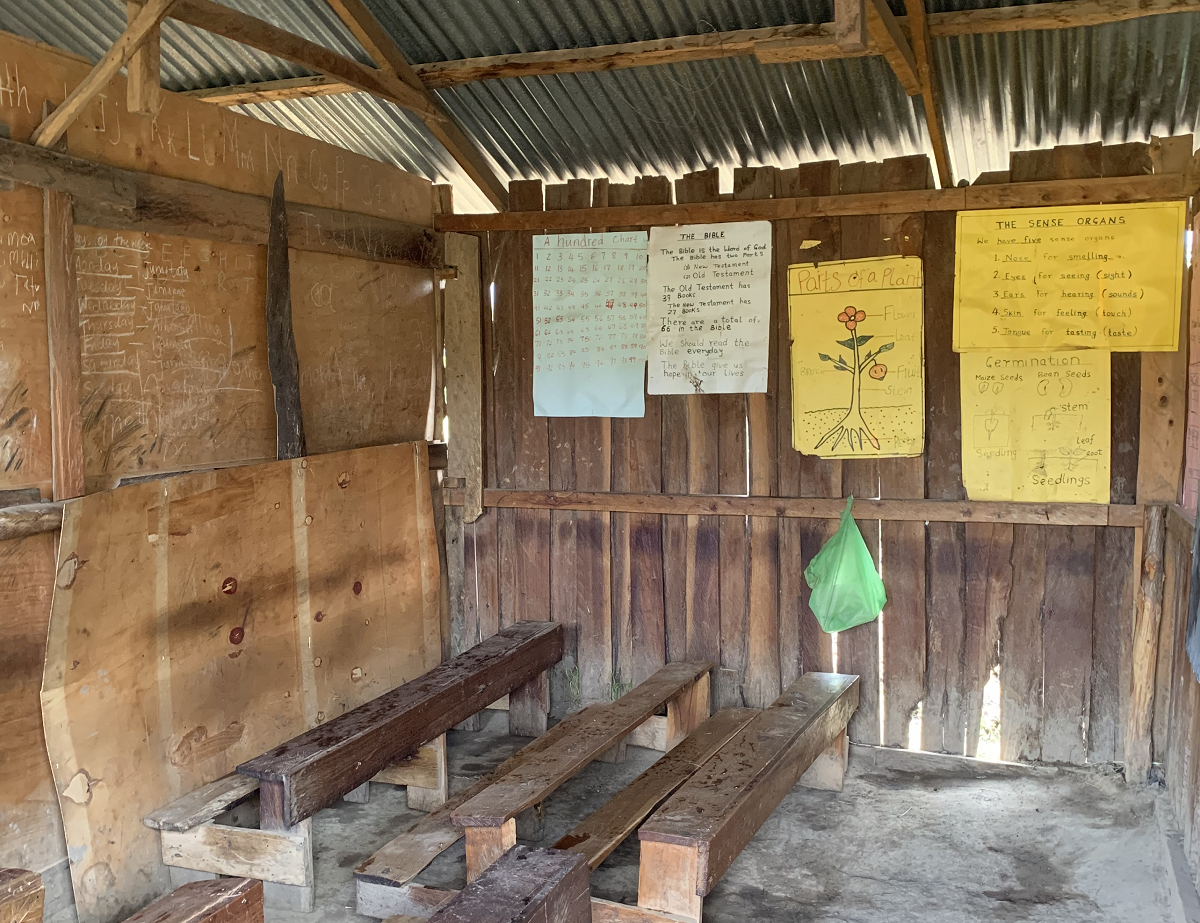 When I saw the nursery school building, I realized that any roof at all was a reason for gratitude. Tumbleweed gathered in a long-abandoned, roofless rectangle formed by four sturdy, burnt-clay brick walls. As we drove away, I silently thought about my own children’s bright, cheerful preschool and didn’t speak until I could stop feeling the tears prickling in my eyes. 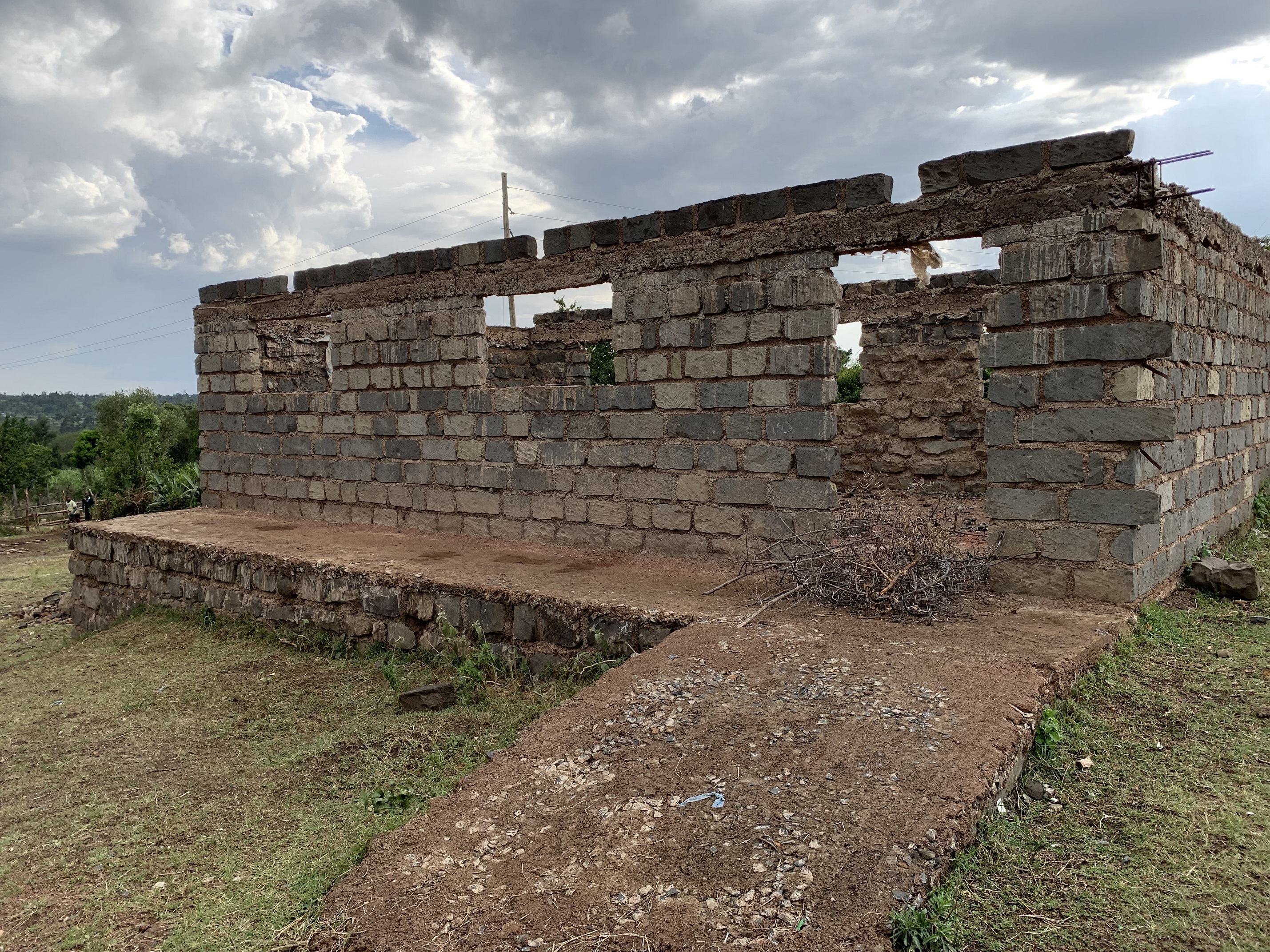 In every community, children gathered to watch the strangers who had come to see their school (and presumably puzzle over why they were so interested in taking photographs of latrines). When we pulled up outside Laila Primary School, my appeal was no less diminished. This time, however, the students didn’t shyly hang back by the school gates. They swarmed around me and my companions. “Jambo!” they called excitedly. “What is your name?” they asked in English, which all Kenyan students begin studying in grade school. I knelt down and greeted them as they tried out their English on me, some proudly leaping forward to introduce themselves, and others dissolving into giggles when I asked them a question.

A quiet, firm word from their teachers, and the students scattered back into their classrooms instantly. I was free to tour the school grounds with the head teacher, who proudly showed me how the school has flourished since the Unstoppable Foundation began working in Laila in 2016. As we walked past the classroom buildings, he pretended not to notice the occasional small head peeping out from windowsills to shoot me a wave and a grin, and vanish out of sight. The sense of joy in the school was palpable. 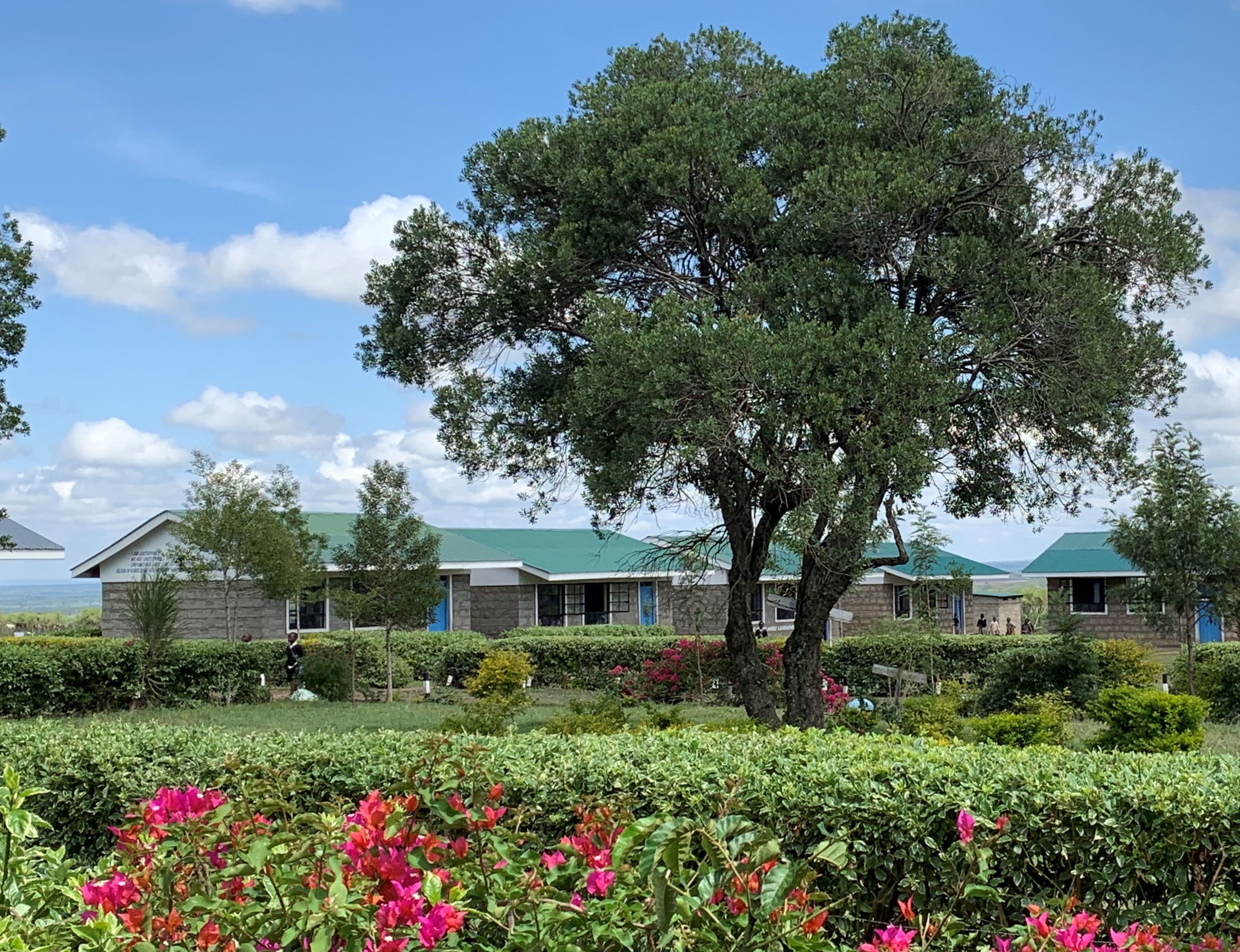 A dozen tidy brick classrooms were arranged around a courtyard planted with flowering bushes and trees to shade students from the sun. A fully-outfitted library stood beside the classrooms, the interior and exterior walls decorated with messages encouraging for the children to believe in their potential and not to limit their dreams. Situated midway between the latrines and the educational buildings was a fountain of clear, running spring water for drinking and hand-washing. I watched with delight as three small boys ran past me to the fountain, cupped their hands under the stream, and drank handfuls of fresh, clean water – a resource so fundamental to life, but also completely unavailable in their community a few years ago.

As I examined the new buildings – a school kitchen, a boarding accommodation for 7th and 8th grade students, teacher accommodation, the Unstoppable Community Leadership Center under construction – one mud and dung structure, walls crumbling to the ground in great chunks, stood out as out of place among the new infrastructure. It was the old classroom block. 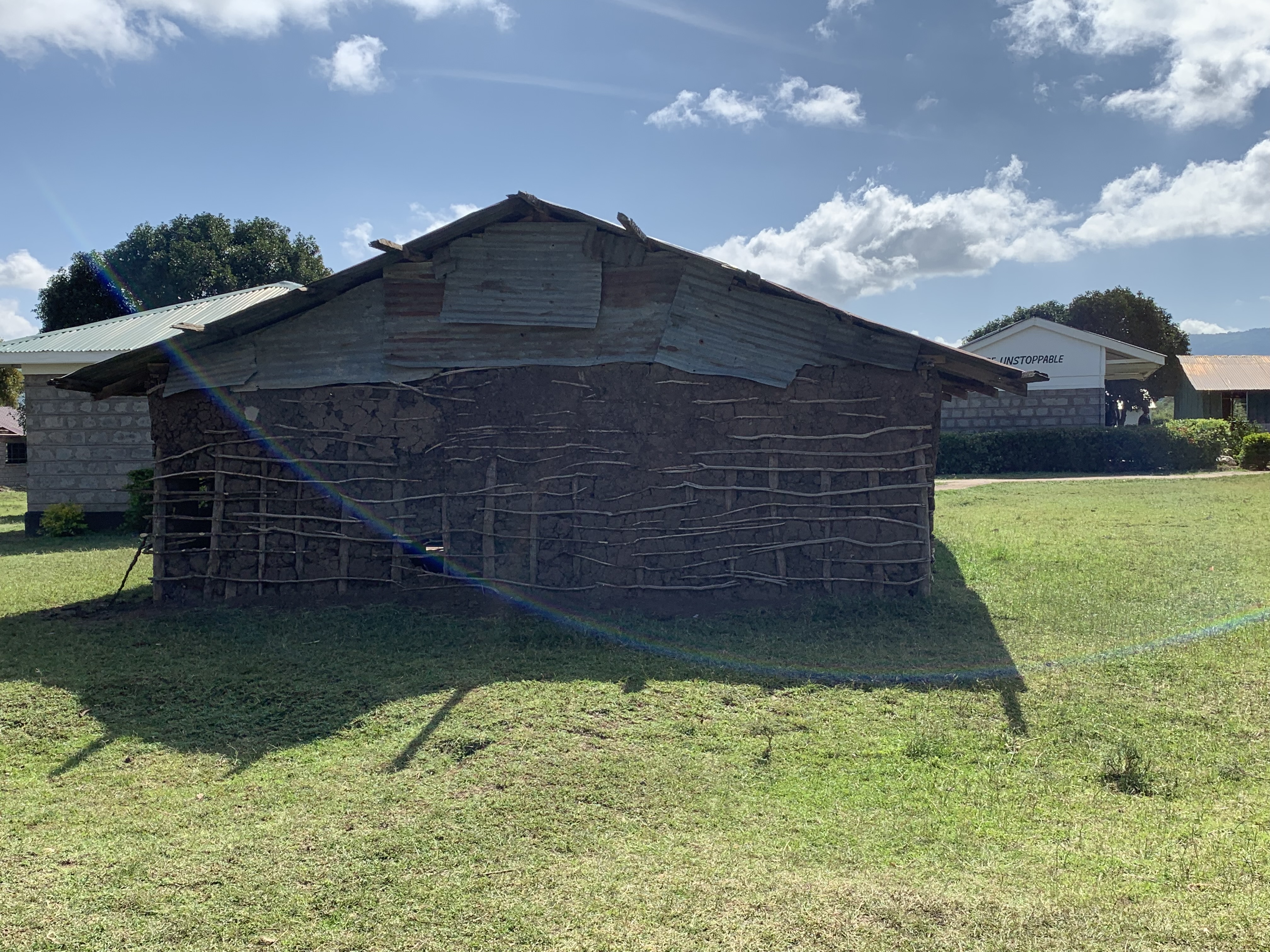 Looking at the disintegrating building, my mind traveled back to Nderiat. Instead of the crushing sadness I had felt as I first surveyed the decaying classrooms, I felt hope. In my mind’s eye, new buildings sprang up over the rocky field – bright, trim classrooms designed for learning, a school kitchen serving nutritious daily lunches, a water kiosk dispensing pure, pathogen-free water – just as I had witnessed in the Unstoppable Community of Laila.

I am only in my third month at the Unstoppable Foundation, and I’m still learning the ropes, but part of my role will be to regularly document and report on progress in the communities we support. When I return to Nderiat later this year, my heart will rejoice when I see one or two of the building blocks of that vision in place. As Nderiat is able to access essential infrastructure and services that most of us take for granted, like clean water, sanitation facilities, and access to medical care, the community will be able to focus on longer-term goals, such as secondary education for their children and building small businesses.

In just a few short years, I look forward to seeing Nderiat thriving — like so many other Unstoppable villages, a testament to our ability reach around the globe and touch the lives of other humans, and to the remarkable way that we can empower communities to transform themselves.

Rachel Seftel is the Programs Manager for the Unstoppable Foundation. Brought on in response to the rapidly growing portfolio of communities and programs the foundation supports, her role is to manage day-to-day program operations, oversee program evaluation and maintain local partnerships. 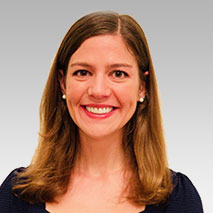